Teri and Del at the finish line of a favorite 15k run.

Teri Preston was active, a runner, a cyclist, frequently taking athletic classes at the local Y.  Unlike her husband Del, she was not on any medication.  Yet she carried an extra 30 pounds, and, had firmly set her sights on finding a way to “eat healthier.”  She’d been obese as a young child, and remembers that time as painful and frustrating, with family and physicians suggesting she lose weight but none having any workable advice for doing so.

In 2013, Teri and Del watched the Forks Over Knives documentary, which led her to read The China Study by T. Colin Campbell.  “I wondered why no one seemed to know this information, why doctors didn’t share it with patients. It made me want to dig deeper.”  Which she did.

I see so many people around me – my age, older, even younger – who
struggle to get around, and I don’t want that. Our food choices affect us. –
Teri Preston

Teri and Del decided to give the whole food, plant-based diet a try, and eased into the lifestyle over six months.  They began by cutting out red meat, then chicken, then fish, adding more and more veggies, and finally making the turn to no 100% plant-based – beans, legumes, grains, fruits and vegetables – after the Christmas holiday.

Teri’s Results:  Teri dropped weight gradually, shedding and keep off even more pounds when she and Del quit using oil in their cooking.  She remains medication free, which today is unusual among peers.  She remains an active runner and cyclist – with some 25 marathons to her credit – and notes that she feels better during endurance activities and recovers more quickly afterwards.  “My body just feels so much better this way.  I used to think, ‘I can eat whatever I want since I just burned 2,500 calories,’ which I know now isn’t the case.”

Teri notes she didn’t feel any pressure to stay on the diet – she and Del had decided for themselves to do it – but that the positive results they both experienced encouraged them aplenty to stay the course.  “Your body is an amazing machine if you give it the correct fuel and treat it well!” 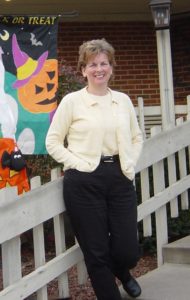 Travel Smarts: Teri travels often for work and routinely packs, makes, and shops for food when she’s on the road.  Her breakfast oatmeal and wraps with ‘no-tuna’ chickpea salad are her travel basics, and she’s not tired of them yet.  “I’ve got it down to a system, I love my food, and, I consider it a worthy investment in my health.  I see so many people around me – my age, older, even younger – who struggle to get around, and I don’t want that.  Our food choices affect us.”

Teri explains that maintaining a trim weight while eating plentifully is easy this way, but that a few days off plan can quickly pack on the pounds.

Community:  “Finding support groups or others who eat WFPB is really helpful, especially in the beginning when you have no idea what options may be out there.”  Teri and Del did a Google search and found a Plant Pure Nation (documentary) pod of locals, and, are both active in supporting newcomers to the lifestyle via Facebook groups and local presentations.

Teri says she loves cooking whole food plant-based, and likes to try new recipes.  “There is so much scientific evidence that this is the best way to eat for a healthy lifestyle. I wish everyone could see that.  It often takes a medical scare for people to seek this lifestyle, but there are so many benefits I wish they’d find it sooner.”

Family:  Teri and Del’s daughter, and her children, have joined them in eating WFPB.  Their remaining four grown children refer to visits to Teri and Del’s as detox from their standard American diets, and are getting an up front, close and personal look at what the diet can do.

Going Forward: “Every doctor should be playing Forks Over Knives in the waiting room.  Every restaurant should offer an oil-free plant based option. Every school should have a WFPB option.”

Teri’s story here is part of a just-getting-started roundup of Iowa’s Own Plant-Based Health Success Stories.

Feel free to post and share, stir the conversation! And if you have an Iowa plant-based success story or know of one, email me at onfindinggoodfoodandhealth@gmail.com or on Facebook.